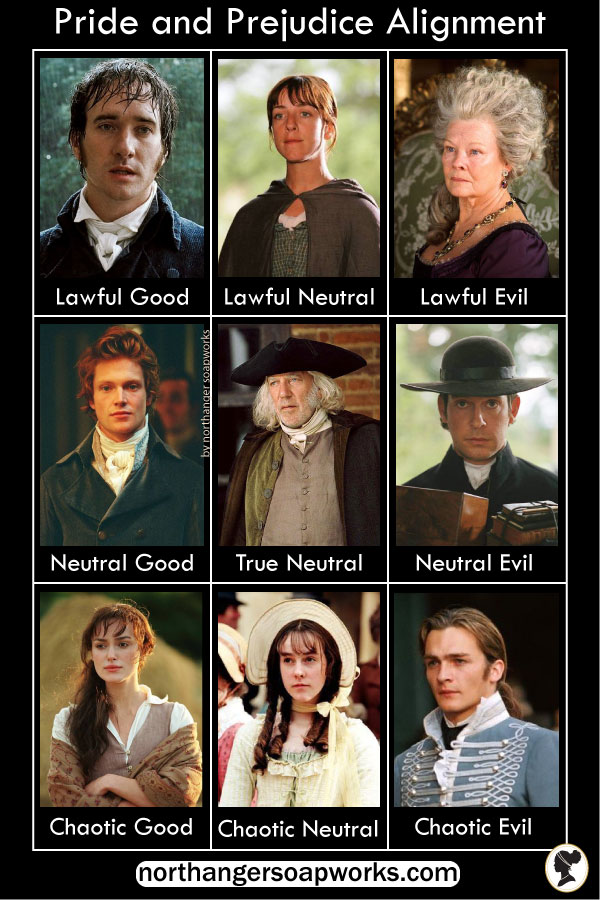 When two worlds collide, great things can occur. (Or, the worlds explode and everyone dies.)

Thankfully, this time it is only GREAT THINGS (I promise). After all, what could be more glorious than bringing Dungeons and Dragons (D&D) into every part of our lives, including that part occupied by our favorite author, Jane Austen? This is how I spent my youth–playing D&D style games and watching Pride and Prejudice every weekend.

If you are unfamiliar with D&D, it’s a fantasy role playing game you can do from your kitchen table with paper and pencil and a few friends. One of the most notable things about D&D is the character alignments. When you create your character, you can choose one of nine alignments (or ten, if you choose unaligned). You are good, neutral, or evil, and then either chaotic, neutral, or lawful, with any combination of those two. There are quite a few alignments around the internet of popular television shows and novels, and I had to add mine to the pile beginning with Pride and Prejudice.

On the axis of Good vs Evil, one does not need to be a murderer to be classed as evil. It is a relative concept. This is also true for chaotic vs. lawful.

Mr. Darcy, no matter his failings, is a lawful man. He has strong feelings on how things should be done, and the order to be maintained. He wants to treat people justly, but his “good opinion once lost is lost forever”. He cares about social structure, which lends to his lawfulness, and even mentions it during his first proposal to Elizabeth when talks about how he is going against his better judgement.

He is good and generous, caring deeply for others.

Charlotte is also a very lawful soul. A man asks her for her hand in marriage? There is no question of her acceptance and following the dictates of society. And yet, her haste in doing so puts her character into neutral territory, as in her desperation to marry, she steals Mr. Collins away from the Bennet girls, and a possible chance for Mary.

Similar to Mr. Darcy, Lady Catherine is a lawful woman. Her wealth and connections make her all the more lawful in this respect, as holding to the tradition of valuing connections and fortune above other things is to her benefit in increasing the strength of her position in society.  Thus, she wants her nephew to marry into a family with good connections and money. Elizabeth has neither and so Lady Catherine is angry and rightfully so according to the law of society.

Lady Catherine is classed as evil because she goes out of her way to be nasty. The unexpected visit she paid on Elizabeth Bennet, with all manner of accusations, was beneath her.

Bingley is the essence of goodness and kindness–this cannot be doubted. His character is in neutral territory because he is too easily influenced by others. He might have felt himself bound to Jane from the marked attentions he had shown her had he thought about it in a more lawful manner.

Though only Mr. Bennet is shown in the picture, I think they are both true neutral.  Mr. Bennet laughs at his neighbors too much to be good, and though he cares about his family he is not motivated to do anything for them. He prefers to be in his library, detached.

Mrs. Bennet is detached as well–but while her husband detaches himself physically, she is mentally detached and hides from reality. The help she gives her daughters is no help at all.

Mr. and Mrs. Bennet do whatever they want to further their own goals, though it is not necessarily well thought out. They are neither good nor evil, chaotic or lawful.

The character of Mr. Collins is such that at first glance you think he is lawful, but in fact his actions fall short of that and are more self-serving and calculated. He makes a fuss about his obligation to the Bennet family, a lawful idea, but in reality his proposal to a Bennet daughter was for his own gain as she would be more inclined to accept than the average lady because of the real fear of homelessness should Mr. Bennet die. The proposal he makes to Elizabeth alludes to it as well. Had his obligation been truely felt, I don’t believe he would have proposed to Charlotte so quickly.

The evil alignment is justified in my eyes because he uses people to further his ambition, and cares more about pleasing Lady Catherine than being a good person and treating people with kindness.

Elizabeth is the true representation of chaos for a Lady in her time. She refused two proposals when her “lawful” duty was to accept. She cares for herself and her own happiness more than that of others, including her mother (shocking indeed!). She doesn’t follow society’s rules as closely as she ought, speaks out when she should stay silent, and cares nothing for a clean petticoat–making an exhibition of herself.

And yet, she is full of goodness.

Lydia is also chaotic, but as her character has less goodness than Elizabeth’s and there are fewer checks on her behavior. She wants excitement and adventure and is willing to take the low road to get there. I would not go so far with her character to classify it as evil though, as I do not believe she intended harm to anyone by her actions.

Wickham, on the other hand, does intend to harm. Through his actions he has harmed no less than three women in Pride and Prejudice that we know well, and very likely more that we do not. A large source of his chaos are his choices, for who would have expected him to run away with Lydia who was neither rich nor well connected?

What do you think? Do you think I’ve misclassified anyone or can you think of someone better? Tell me who and why, I’d love a discussion in the comments!